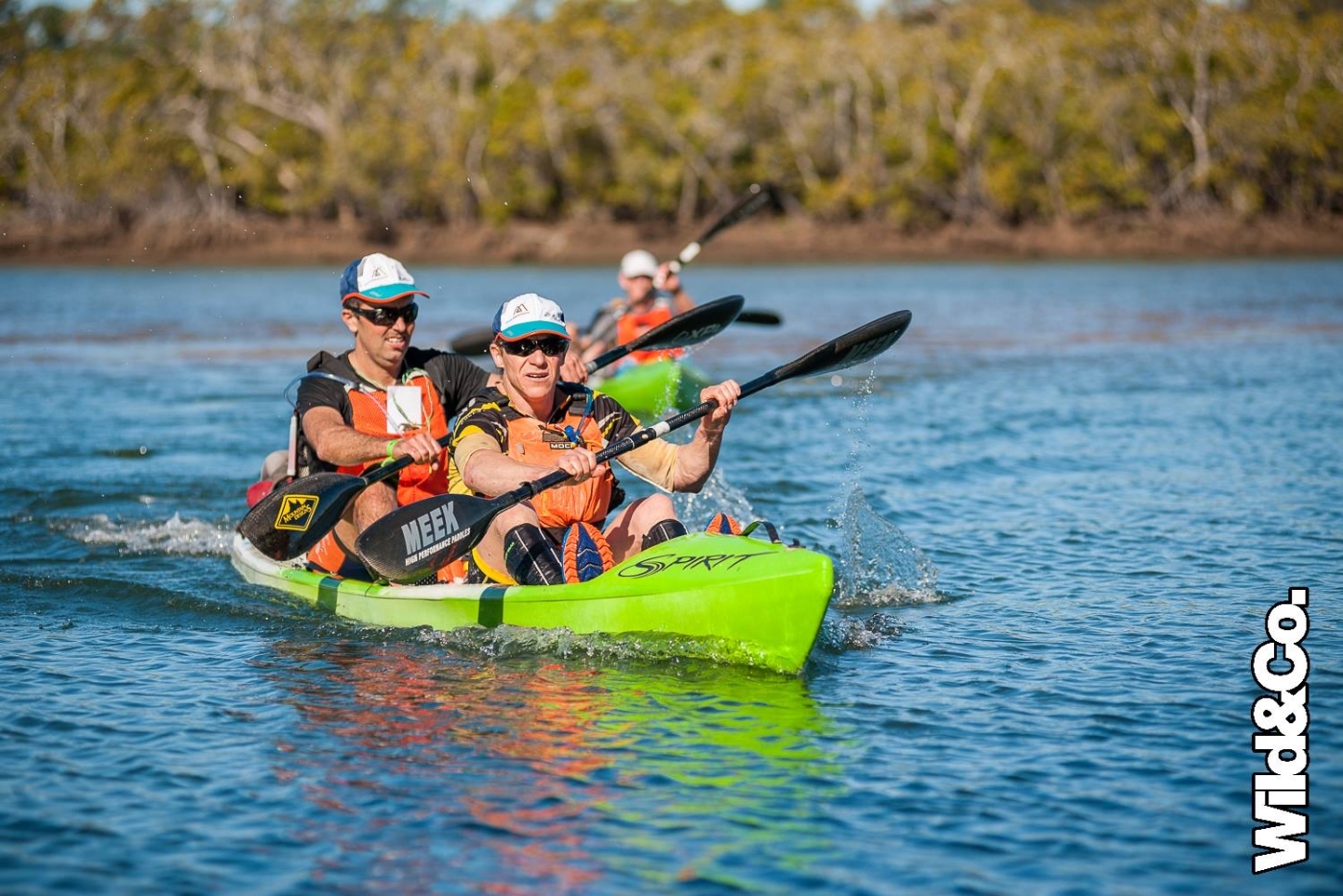 Hells Bells was the third of the four races in the A1 Series and, as a 24hr race, nominally the shortest.  We packed the race into the two day weekend so it was a little rushed but great hospitality from local guru (and one of the course designers) Dave Schloss made it pretty easy for us.  We got the bikes to the drop off and collected our maps at the 9am (very civilized) rego time and it did not take to long to get the general thrust of the course sorted.  The challenge was going to be the raft of trails in the pine forest sections with no way of knowing in advance which trails were overgrown etc.

First up was a 22km beach and 4wd track run on Bridie Island with a short boogie board across the river to the Island.  We hung with the front bunch initially and got the crossing done with quickly.  Inflatable boards were the go as they were faster and could be packed away for the rest of the run.  The pace seemed to lift a little when we were caught by the first of the two person teams and Peak snuck away from us as we were at the limit of our sustainable pace.

The gap grew a little when we transitioned to the kayaks as our gear was not there and had to be recovered from one of the transport boats before we could get organized and onto the boats.  The paddle was shortened as the low tide meant big mud flats and the organisers made the sensible decision not to make us wade through knee deep mud for hundreds of metres to get to all the CPs.  There were quite a few shallow areas so we had to pick our course carefully and caught JRPCA powered by Peak Adventure (I will just call them PA from here) as they chose a longer route over the mud to CP 11. We paddled the rest of the leg with them swapping badly told jokes and riddles. 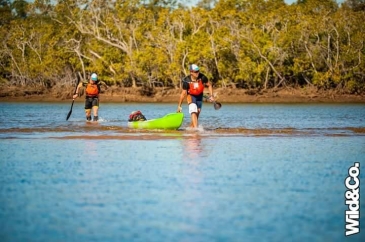 The first section of the bike leg had some interesting route decisions with a choice between riding around or crossing a river with no trail marked on the map.  Although we looked at the river at a couple of points to see if it could be crossed the mirky water put us off and we rode around, getting caught by Gary Sutherland’s Tiger Adventure pair just before we got to the next CP.  After a change of route plan due to overgrown trails we rode with them across the highway before we both headed off on the wrong road after crossing.  We turned back a bit earlier and muddled our way back on to a better route.  I won’t go into details but this was the first of a large number of small mistakes and one big one that cost us a heap of time.  We were never far off course but chose a couple of wrong tracks when we missed overgrown ones or did not find the CP even though we were looking within a stones throw of where it was.  Slowing down and taking good care navigating was the go.

We arrived at the next CP to find ourselves in second place.  PA had taken the shorter route with the river crossing and made fewer nav mistakes so we were about 40 mins behind heading into the run.  We chose to do it clockwise and were pretty efficient for the first four CPs before wasting some time turning the wrong way on a creek and then selecting a “disappearing” track on the way back to the TA.  This did give Leo the chance to have a lawn mower ride so some would say it was worth it in the end.  The digger we passed was all covered over so the mower had to do! 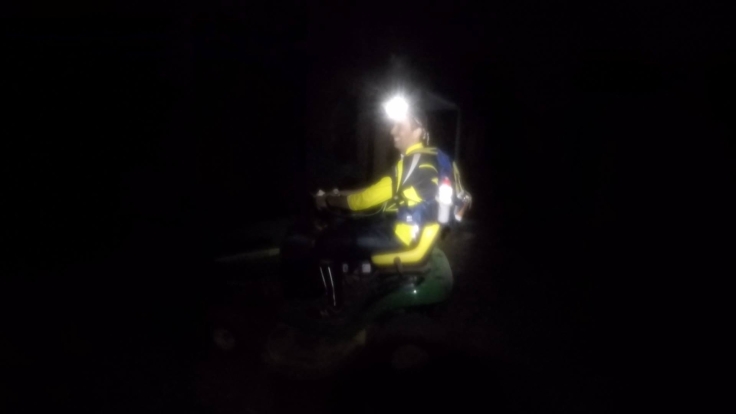 The time gap to PA was about the same as we transitioned onto the final bike leg which looked straight forward on the map.  Chatting as we rode along we all agreed PA were deserving of their lead and a likely win.  The leg did indeed prove to be straight forward until the second to last CP which required us to cross some paddocks to a fence corner and cross a creek to find the trail again – a distance of 1km that proved pivotal in the end. We were catching quite a few Fairy Bells (the shorter course option) teams at this point so there were people and lights everywhere, including four over in an area which was out of bounds.  We followed the fence line to find the CP and were very surprised to find the four lights belonged to PA who arrived at the CP as we did.  The race was on.

After helping Jodie from PA down the riverbank when the rest of her team headed up the other side without her, we ended up behind them for the hike a bike lantana scrub bash.  The race was on and we slowly pegged them back on the rough grassy trail ignoring slipping gears due to accumulated grass in our chains and cassettes.  As we hit the bitumen for the last few km into Coloundra.  We rode our legs off, paranoid that they were on another route or just around the corner so were both relieved and elated to get there first.

It was a lucky break for us after a somewhat frustrating race earlier on.  We are a lucky team in the sense that we race as much for each other’s company as the result, so shrugged it off, kept moving and were able to take the chance when it came.

Well done to the organsing team on a great course.  There were only 5 legs but quite a lot of checkpoints and, with the controls generally set a little off track, accurate navigation was required to find them quickly.  Good use was made of the local trails and hills and for us this made for an interesting race.

Wildside is next for the team with Sloshy stepping in for Hugh who is preserving his leave for some family time.