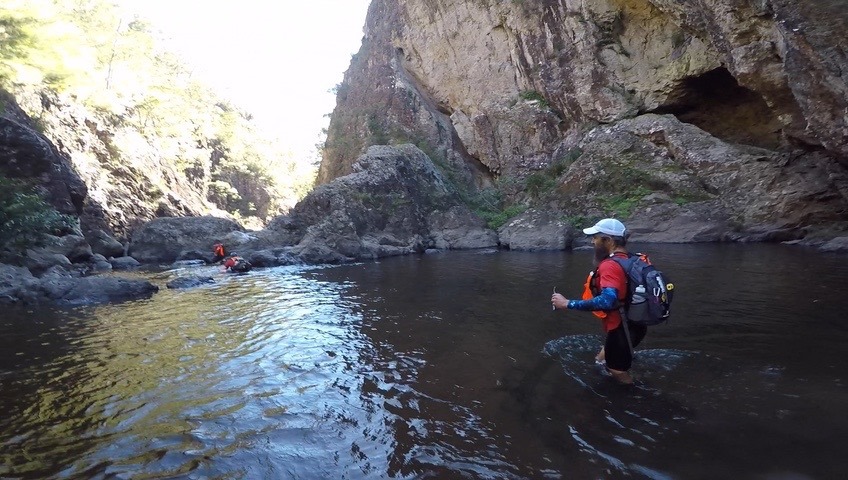 Well the drama for this race started the day before with wild weather across the east coast, especially Sydney. This meant that whilst ¾ of Team Thunderbolt arrived in Marrochydore, multiple delays and 2 cancelled flights later Hugh was stuck in Sydney at midnight with no way to join them in time for the race.

Absolutely gutted.  We had been looking forward to another good hit out racing together against some strong competition.

Damo to the rescue

Our saviour came in the form of a surfer dude from Marcoola known to us only as ‘Damo’. His team had lost a team member a few weeks prior and as they had been unable to find a replacement he was going to follow his other two teammates, racing as a pair, around the course. That was until he got a call from us at 5.30am Saturday morning. He was happy to jump into our team and we were happy this meant we could at least race competitively as a team of four. He probably didn’t quite know what he had got himself into.

It was a fast and furious kayak start, le mans style with just a few CPs to collect around Baroon Pocket Dam.

The Obi Obi creek trek/rock hop up the gorge was spectacular and definitely a highlight of the race, even with the oh so fresh swims required.

We finally got to take off our PFDs as we then transitioned onto the bike – a split bike leg with an optional ‘elite’ trek in the middle. We spent much of this leg debating amongst ourselves whether or not to do this. Would we make the time cut offs later on? Were the extended time estimates accurate? Was it going to be worth? In the end with the top 3 teams 45min ahead already on the elite trek and team Rogue around us, we both decided to not risk it and continue on when we reached the intermediate transition, hoping to pull off a Steven Bradbury if it did take the top 3 top teams too long to complete and they missed later cut offs.

We rode on as dusk and evening fell, again trading places with team Rogue. CP 12 had us clambering up a fabulously narrow spur line, having made a break on Rogue channeling our inner Hugh, with a faster and different route. Most importantly, a route that allowed us to get a Leo machinery photo. This gap was lost as a mechanical and flat to Damo’s steed allowed them catch back up.

The trek in the Wappa State Forest had a bit of off track (not quite as dense as we may have expected) and a bit of on track certainly with a few little hills but good to stretch the legs. Coming back in from this trek we saw Thought Sports, Alpine Avengers and Tiger Wild Earth just starting, having taken only 2-3hours for the elite trek, unfortunately not quite as long as predicted. Coulda, shoulda, woulda, oh well.

The final MTB in the parklands certainly had a good mix of single track, trails and lots of hills – all up it seemed to keep it interesting. While our local Damo was frothing at some of the single tracks we didn’t take, we managed to collect all CPs reasonably efficiently (kinda?) bumping into a few other teams from both fairy bells and hells bells.

The final paddle down the Maroochy River saw Damo back in his element. Rogue had left the TA whilst we were readying boats and adding clothing and unfortunately that was the last we saw of them unable to catch them. It was a pretty uneventful night paddle against the tide and with the wind picking up. The final CP was less than a km from the finish and we all got very cold searching for it in our wet gear and howling wind. Very happy as always to cross the finish line if not very cold! Very thankful too that our accommodation and hot showers, was only across the road.

Whilst this race was not what we originally had planned it was great to be able to race around the course and have a bit of fun (unlike Hugh). A massive thanks to Damo for joining Thunderbolt – 5thoverall a good result.

Our race video is here.  As always thanks to our many supporters including Aussie Grit Apparel.